Staying Safe While Driving in An Urban Environment

Staying Safe While Driving in An Urban Environment 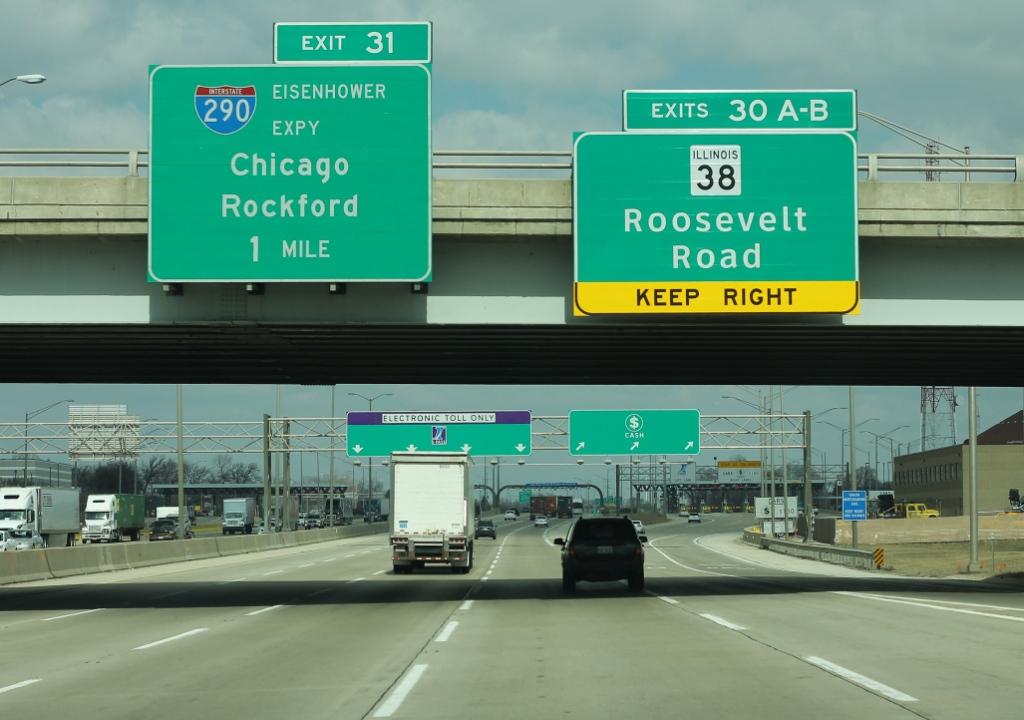 You do not want to make the evening news, and we are all after the same thing. Safely going home to our loved ones.

Your first line of staying safe is watching for dangers around you before it is too late. At first glance, this article might look as though it applies to Concealed Carry Holders, but the tips are the ways to prevent ever needing a firearm.

A Concealed Carry holder “CCL” carries a handgun to protect themselves and those around them, but it does not have to be your first line of defense. Violence is everywhere, and you are kidding yourself if you think it’s not. Violence is not limited to major cities like Chicago, where they already had over 4200 shootings this year.

There is a little town called Ware Place in SC with a population of 110 people. Recently, they had a fatal shooting in the parking lot of their local Dollar General Store, so never say “that won’t happen to me” because life has a funny way of proving us wrong.

A “fight” can be a confrontation, situation, incident, encounter, conflict, whatever you want to call it, you want to avoid it. Many people let their guard down, and I cannot stress the following tips enough. Be aware of your surroundings and try to prevent being the victim. It is situational awareness.

I reviewed footage from many incidents that happened over the past few months. I would estimate most people were distracted and were not paying attention. That means many victims would not have made the nightly news had they just followed some of these tips. Sure, there are plenty of other tips out there, but this article would go on forever if I included them all.

Most criminals are looking for a soft target or target of opportunity. You have heard the saying “taking the path of least resistance,” do not be that path, and the criminals will hopefully move on to the next person who looks more vulnerable.

Keep your vehicle windows rolled up, not only when you are parked, but when you are driving. As soon as you stop at a light or get stuck in traffic, that unlocked door gives the criminal an easy way in. Criminals can walk right up and stick their arm in to unlock the door, or worse yet, stick a gun to your head.

Late evening, a car in the left turn lane put the vehicle in reverse at a stoplight. You could tell because the backup lights came on. RED FLAG! (Light was green, but I stopped back aways and went nowhere until they did even though the light was green)

Later at night, about a block behind me, a car had no headlights on. The person was probably drunk or just an idiot who forgot. RED FLAG!

Lock your door every time you close it. I had a girl in a Concealed Carry Class who had put her child in a car seat on the passenger side. She walked around the car to the driver’s door, and that’s when someone attempted to get her child out of the car seat. Fortunately, she had buckled her child in, and like any parent would have done, she freaked out. That is terrifying, and thank God the guy took off. Put your kid in the seat, lock the door, walk around, unlock the door, get in and immediately lock the doors. Now, you might understand how important it is to use your locks. This incident happened this year in a far western suburb of Chicago.

Do not be looking in your purse and stay off your darn cell phone. For example, find your keys before you walk out of some place, not looking as you walk through a parking lot. Oh, and sorry, don’t get upset with me, but the car is not the place to put your makeup on.

We have all heard this one. Leave room between your car and the one in front of you. Did you ever think about staying in the lane closest to the center of the street? Even if you have to drive the wrong way down a road, an out is an out. You hear the “give yourself space” statement all the time, but do you do it?

Last year during the “peaceful protest,” I was driving down La Salle, headed for the interstate. Right around the 500 block, there was a group of people arguing right in the street, so I literally drove the wrong side street. Fortunately, it was late, so there was no traffic, and I would rather explain to the police why I was going the wrong way and avoid the mess.

There have been over well over 200 shootings on the Chicago expressways this year, so don’t think driving at higher speeds on a busy interstate will make things safer. Driving in the right-hand lane can give extra room to maneuver, and you can quickly get off at an exit if needed. As time goes on, it seems like drivers are becoming more and more aggressive. Avoid anything that might cause road rage, like cutting other people off. A great example of this is the on-ramps at Austin and Harlem as you head into the city on 290. The ramps are on the left, and everyone wants to force their way as far as they can before they merge and act like billy the badass.

I was walking down State Street in River North a while back and thanks to the parking app totally screwing up, I was way off my destination. A group was standing around, and it seemed better to avoid them. I walked (I guess it was more like jaywalking) to the other side of the street and used that sidewalk. Give yourself extra time to react, just like driving and leaving as much distance as you can to maneuver around a potential threat. Another tactic criminals like to use is to let you walk by and then strike from behind. Keep an eye over your should as you pass.

In June, I was in the Gold Coast having dinner at Truluck’s, and my car was in a very secure parking garage on State St. I returned to get my car, and as I walked out of the stairway, three people just seemed out of place about 100′ away. I looked right at them and stopped so they knew I was watching. If possible, I was not letting them close the gap. Oddly enough, they turned around, walked about 20′ back, and proceeded down the ramp. Did it prevent a confrontation? I don’t know, but I was not going to find out, and once again, I wanted to leave as much space as possible. It applies to the burbs as well. If someone is sitting in their car or standing around, avoid them if they seem out of place. By the way, I found out the next day there was an attempted carjacking right there on Oak.

I took some pictures of the parking garage, and that’s when I noticed the broken window in the circle below. 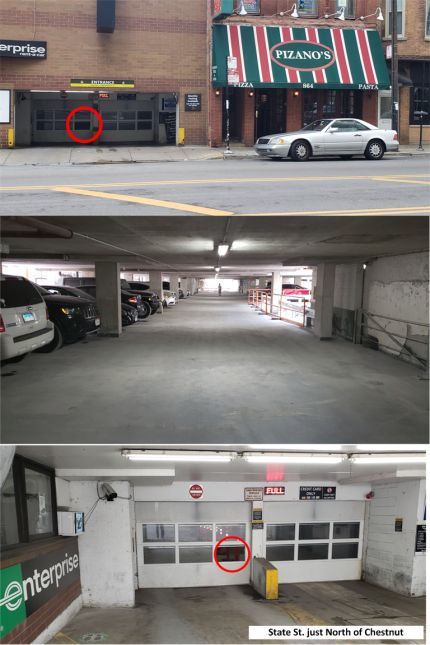 How many of you walk into a gas station and leave your car running? That’s an excellent way to see your car drive off without you, and you can watch videos all over YouTube. Keep an eye out for people sitting in their vehicle or standing around that seems out of place. If someone takes your vehicle, you might as well wave goodbye. It’s interesting that unless there was a use of force, it would probably be theft instead of carjacking. The police departments do not include theft in the published carjacking numbers. In September, a concealed carry holder shot at two guys attempting to steal his car from a Hoffman Estates gas station. The yellow circle is where his car was, and the other view is looking at the building back at his car. Don’t think a quick dash inside makes it any safer than parking a few hundred feet away. 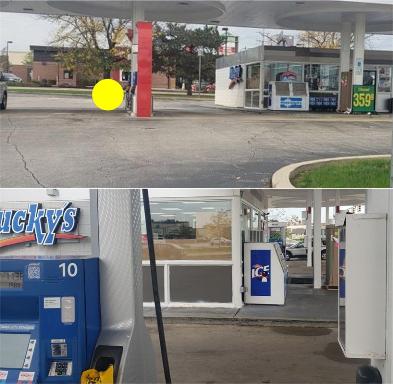 The image below is of an ATM at Elm and North Clark, and you need a credit card to get through the door. Believe it or not, that lobby is basically the home of the man in the picture. There have been attempts made to keep him out, but it continues to go on. I took this picture last week, and I don’t think he appreciated being the star (I ended up leaving pretty fast). 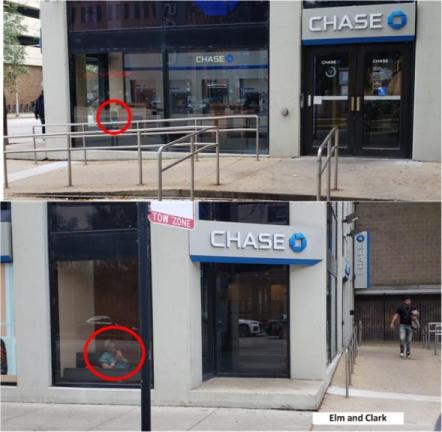 I asked a Chicago criminal defense attorney. “The man is loitering, basically “hanging out.” The state and city have laws against people acting this way, but the police don’t usually enforce it because there are so many homeless people in the downtown area. These people will return to the locations day after day, making it a waste of time when there are so many other crimes being committed.”

Listen to that little voice because you can prevent many things from happening if you watch what is going on around you. Walk with confidence and try not to appear like an easy target.

A good, concealed carry instructor will go over situational awareness. It may only be the basics, but it gives you an excellent foundation to build on. The more you can learn about watching for threats, the less likely you will need to use your gun. Avoiding the conflict and avoiding the dangers is part of being a responsible gun owner.

Many people will disagree with me on this, but keep in mind that this article was written for concealed carry holders. I want to make something completely clear. If you have no other choice and have to engage a threat, whoever threatens your life is not your friend! They are not looking to have a conversation, not looking for a therapist, and they will not play fair. Be mentally prepared and remember it may come down to your loved one’s life and saving your own. If attacked, you are there to stop the aggression and live to see your family. Carrying a firearm is all about surviving a potentially lethal encounter and protecting your loved ones.